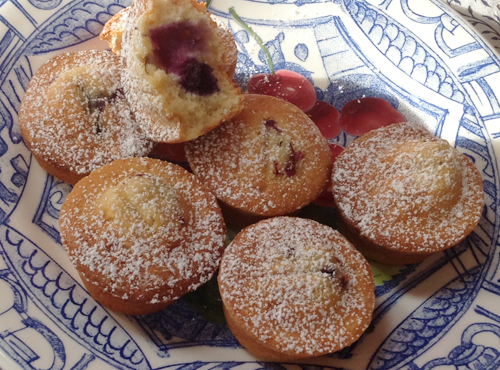 These little almond cakes are also known as financiers and can be found in Paris baked in shallow rectangular tins. The cooked cakes are said to resemble gold bricks. Nowadays they are more often known as friands, which means something like ‘dainty morsels’. They are baked in either mini-muffin tins or moulds. A few fresh or frozen berries pushed into each friand before baking makes for a delicious treat.

40 raspberries or blueberries , fresh or frozen

Preheat oven to 180°C and grease mini-muffin tins or moulds with a little of the butter. In a large bowl, combine flour, sugar and ground almonds. In a separate bowl, whisk egg whites to a loose froth, then combine with butter. Make a well in flour mixture and pour in butter mixture. Mix gently, taking care not to overmix.

Spoon mixture into tins until each is two-thirds full. Press 4 raspberries into each friand. Bake for 20–25 minutes until friands feel a little springy and a fine skewer inserted comes out clean. Cool in tins on a wire rack for a few minutes before turning out. Set friands right-side up and allow to cool. Enjoy with tea or coffee.

Noisette Butter
Melt and simmer butter in a saucepan. Cook the butter until it is golden brown and begins to smell nutty. The milk solids will appear as golden specks at the bottom of the saucepan. Stop the cooking quickly by putting the pan into a basin of cold water.