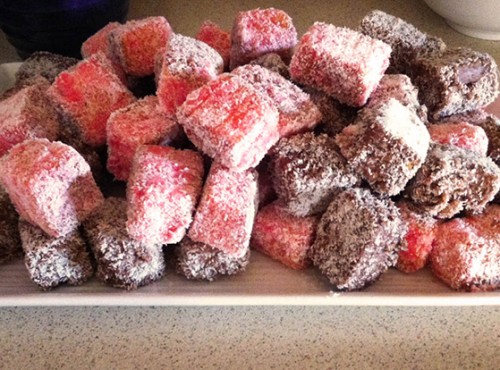 Sourced from
The Cook’s Companion App and book

In my family there are those who cannot go past a chocolate-dipped lamington but there are others, such as myself, who have a soft spot for the jelly-dipped pink ones. It’s best to cook the sponge the day prior to assembling the lamingtons.

a packet of strawberry jelly crystals, or raspberry

Select a 20 cm x 28 cm lamington tin and brush with some of the melted butter. Dust with plain flour and tap to dislodge excess. Preheat oven to 180ºC.

Beat eggs and sugar in an electric mixer until very thick and mousse-like – this will take abut 10 minutes. Sift flour over egg mixture and fold in thoroughly but lightly using a large metal spoon. Trickle cooled melted butter down sides of bowl and fold in thoroughly. Pour into tin and bake for 15–18 minutes until top of cake feels springy to the touch (but do not open oven door before 15 minutes has elapsed). Allow cake to cool for a few minutes in tin, then turn out onto a clean tea towel and leave until completely cold.

For chocolate lamingtons, mix 1 part cocoa with 8 parts icing sugar, 1 part boiling water and 1 part melted butter to make icing, and prepare a tray of desiccated coconut. Impale a square of sponge on a fork and dip in icing, then in coconut. Allow to dry on a wire rack before storing in airtight tins. Some cooks dip the cake squares in melted jam before the chocolate icing.

For pink lamingtons, make up a packet of strawberry or raspberry jelly crystals, using the quantity of boiling and cold water as suggested on the packet. (85g crystals dissolved in 1 cup boiling water, stir and then add three-quarters cup cold water.) Swirl the liquid in a bowl over a larger bowl of iced water and as soon as the jelly shows signs of thickening, dip the lamington squares into the jelly and then in coconut. Allow to set. Will make enough for 12-15 lamingtons, depending on size.