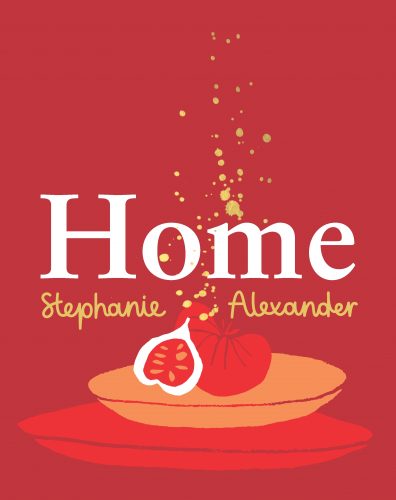 Home is a collection of more than 200 original recipes by Stephanie Alexander. Each recipe is a finely crafted tribute to her passions and preferences for produce and flavour, and each reflects her consummate skill in communicating the fundamentals of technique.

There are detailed recipes for the more ambitious home cook, but also simple ways to combine beautiful ingredients to make dishes for every day eating, Essays on people, places and experiences offer inspiration to readers looking to deepen their knowledge and appreciation of food.

Beautifully designed and photographed, Home is a celebration of the sensual and social delights of food and an essential addition to any kitchen shelf. The recipes – classic, masterful, and delicious – will be cooked, shared and enjoyed for years to come.

Stephanie Alexander’s unparalleled career in food has spanned five decades. For 21 years, she was the force behind Stephanie’s Restaurant, an establishment that set a standard that defined an era. She is the author of 18 books, including The Cook’s Companion, which has become the kitchen bible for Australian cooks, selling over half a million copies. In 2001, she launched the Stephanie Alexander Kitchen Garden Program, which now operates in more than 1000 schools around Australia, teaching children about growing, preparing, cooking and sharing delicious, fresh, seasonal food. The recipient of the Medal of the Order of Australia and an Officer of the Order of Australia, Stephanie has launched hundreds of careers, inspired generations of home cooks and fundamentally transformed the way we think about food in this country.

Our bounceback has coincided with the arrival of spring. A loud chorus of birds wakes me each morning. They swoop and chatter again at sundown. There are birds nesting in one of my crepe myrtle trees, at every turn there is rapid growth of new leaves, the smoke bush is absolutely glorious, and the weather is that springtime mix of sunshine and heavy rain. I confess I found it startling for the first few days to see groups of happy people congregating in cafes and restaurants and strolling without masks. Startling but also heartening after these months of lockdown.

Our bounceback has coincided with the arrival of spring. A loud chorus of birds wakes me each morning. They swoop and chatter again at sundown. There are birds nesting in one of my crepe myrtle trees, at every turn there is rapid growth of new leaves, the smoke bush is absolutely glorious, and the weather… END_OF_DOCUMENT_TOKEN_TO_BE_REPLACED

I have now caressed my new book “Home” and can report that it is all that I had hoped for. The design by Michelle Mackintosh is wonderful and the photography by Armelle Habib absolutely splendid. The publicity is a mix of phone and Zoom. Event after event has had to be cancelled or postponed. I did receive… END_OF_DOCUMENT_TOKEN_TO_BE_REPLACED

I am proud to announce the imminent publication of what I think is my nineteenth book. ‘Home’ will be published on September 28.   This book has been a joy to write and I have revisited many happy moments. I have indulged myself, spending happy hours in my own library; I have triaged boxes of… END_OF_DOCUMENT_TOKEN_TO_BE_REPLACED

Newsletter 73 – I Have Been travelling

I Have Been Travelling Tony at Trentham Firstly to Trentham to see how my friend Tony Tan was getting on. Two years into his new life as a country gentleman and first-time gardener and carer of chickens he is enjoying life and enthusiastically preparing to hold cooking classes soon in his purpose-renovated  spaces. It is always an… END_OF_DOCUMENT_TOKEN_TO_BE_REPLACED